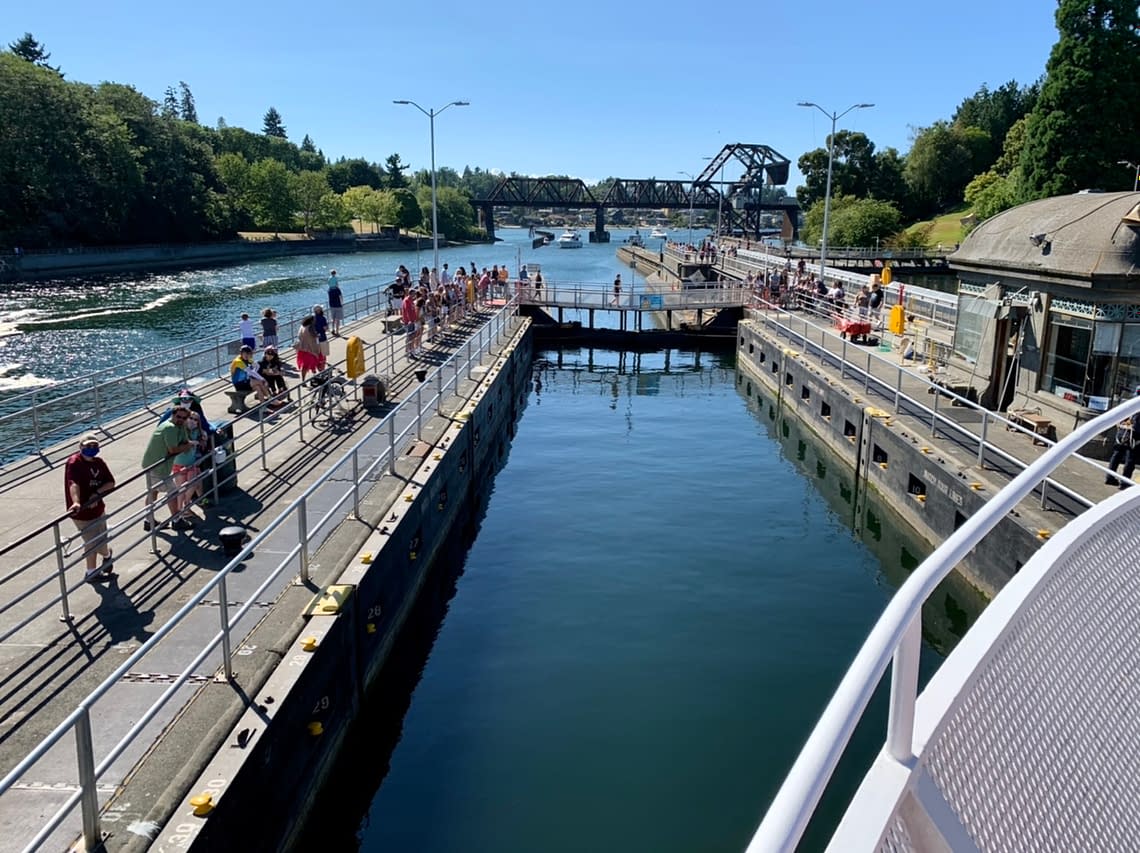 The Ballard Locks are one of Seattle’s most popular tourist attractions. The Locks separate the saltwater Puget Sound from the freshwater lakes and channels inland, and also function as a “boat elevator”, moving boats up and down between the two separated water levels. While tripping some things to do during our recent visit to Seattle, I discovered that Argosy Cruises offers the chance to pass through the Ballard Locks by boat, with their twice-daily Locks Tour. Most visitors tour the Locks by land, standing on their edge to watch the boats pass through. But the idea of touring the Ballard Locks by water was a no-brainer for me. I wanted to experience the boat elevator firsthand – in a boat. And so we spent two hours one beautiful Seattle afternoon cruising the waterways around Seattle and touring the Ballard Locks by boat.

The Ballard Locks sit in a channel between the Puget Sound and Lake Union. In the map below, the Sound is to the left, and Lake Union sits next to I-5. A manmade channel called the Fremont Cut connects the two. The Locks sit inside the channel.

For our Locks Tour, we started at the south end of Lake Union, worked our way through the Fremont Cut to the Locks, and then out to the Puget Sound. We then turned southward, heading down the coast, ultimately docking at the downtown Seattle Piers (directly south of the Space Needle on the map).

Clearly this adventure is more than just touring the Ballard Locks. It also provides great insight into the waterways around Seattle, plus is an enjoyable boat ride with some great views. Argosy Cruises operates the tour twice daily and it lasts for two hours. The second tour of the day travels in the opposite direction.

Argosy’s tour boat loads on a dock at the AGC Marina located at the south end of Lake Union. We used Lyft to get there. This version of the tour, starting at Lake Union, is Argosy’s second Locks Tour of the day. The first starts near their main office at Seattle’s Pier 55. We ended up waiting at the marina just a little past our advised arrival time for that first clockwise tour to arrive.

Once the crew cleaned the boat after the first tour, we loaded on. We were near the front of the line and so were lucky to secure seats right up front on the outside deck (note the chairs in the picture).

While waiting for everyone else to load, we enjoyed the southward view of downtown Seattle. And we had time to visit the bar below deck for some liquid refreshment. Snacks are available for purchase too. Soon our crew introduced themselves, including our guide, who provided live commentary throughout. And then, we were off.

Lake Union is a freshwater lake surrounded by residential Seattle on all sides. It connects with the larger Lake Washington to the east through another manmade channel called the Montlake Cut. Boats from Lake Washington can then use these various waterways and the Ballard Locks to reach the Puget Sound.

Lake Union is a popular spot for water recreation in the Seattle area. The lake seemed to be covered in kayaks, stand-up paddle boards, and even a big blowup floating flamingo, along with plenty of smaller boats. Our larger tour boat worked its way northward through this maze. Everyone down below on the water seemed to know to get out of the way. The view of the Seattle skyline widened behind us, and soon the Space Needle came into view.

Lake Union is also known for floating homes dotting its shoreline. Middle-aged folks like me probably remember the Tom Hanks/Meg Ryan movie Sleepless in Seattle. The home in which he had such difficulty sleeping (due to love not lake noise) is pictured below. It’s the one with the planters and kayak bottoms.

Aurora Bridge spans the northwest corner of Lake Union, connecting the Queen Anne and Fremont neighborhoods of Seattle. Under the northern end of this bridge (and not visible from the tour boat), sits the famed Fremont Troll – a unique and fun piece of street art.

Shortly after passing under the Aurora Bridge, we entered the Fremont Cut and approached Fremont Bridge. This bridge dates back to 1917 and is on the National Register of Historic Places. Due to its low clearance, and the general busyness of this waterway, the Fremont Bridge is the most frequently-opened drawbridge in the United States. Our boat wasn’t quite tall enough to require an opening, and we passed tightly underneath.

The Fremont Cut (pictured above) is 5800 feet long. It connects with a another narrow (but natural) portion of the channel called Salmon Bay. The Locks are centered within Salmon Bay. Prior to reaching the Locks, we passed several Salmon Bay shipyards and dry docks (for boat repair and maintenance).

After passing through the first portion of Salmon Bay, we approached the Ballard Locks. They are alternatively known as the Hiram M. Chittenden Locks. He was the engineer who initially led the construction project back in early 20th century. The Locks serve several purposes. They prevent the mixing of seawater from the Puget Sound with freshwater from the inland lakes and channels. They maintain the level of Lake Union and Lake Washington at 20-22 feet above sea level. And they move boats up and down from the higher freshwater level to the lower seawater level and vice versa – a liquid boat elevator. All of these functions were on clear display as we passed through.

The Ballard Locks consist of two different sized locks – one for smaller vessels and one for larger, plus a spillway dam extending southward from the two locks. Waterflow over the spillway is adjusted to maintain the necessary freshwater levels.

Upon arrival to the locks, our boat entered the smaller one….

Careful examination of the photograph below shows the freshwater surrounding our boat at a level higher than the seawater on the other side of the gate. Once our boat parked fully inside the lock, a gate behind us closed, and the water started to drain away, slowly lowering our boat to the same level as the seawater.

Once the water levels matched, the gates opened, and we drove off into the saltwater side of Salmon Bay

Out to the Sound

Once through the Locks, we headed out through the western portion of Salmon Bay towards the Puget Sound. Houses line the coastline here – all with fantastic views.

After entering the Sound, we turned southward, where we passed the small West Point Lighthouse (built in 1891) with views of Mount Rainier in the distance.

As we continued heading southward, downtown Seattle once again came into view. While traveling down the Sound, the wind picked up and the air temperature cooled, but the sea was calm.

As we continued our journey, Seattle’s full skyline came further into view along with the defining Space Needle. Our guide taught us about some of the buildings and piers that line the Sound in this area. We also learned how the shipping industry operates through this area.

Touring the Ballard Locks and surrounding waterways with Argosy Tours was a great way to spend two hours in Seattle. It was fun to experience the boat elevator firsthand, and I gained a greater appreciation for the lakes and canals that are an important part of Seattle life. Plus who doesn’t love a boat ride out in the open sea, especially if it includes a great view of Mount Rainier and downtown Seattle.

You can book the Locks Tour on Viator by Clicking Here.

For a look at another popular tourist activity in Seattle, check out my post about visiting the Space Needle.

As I did in Seattle, I’ll always try to seek out great local tours to give me further insight into each place I visit. Here’s a post about some of my favorite past local tours.

And check out Viator for other great tours in the Seattle area.