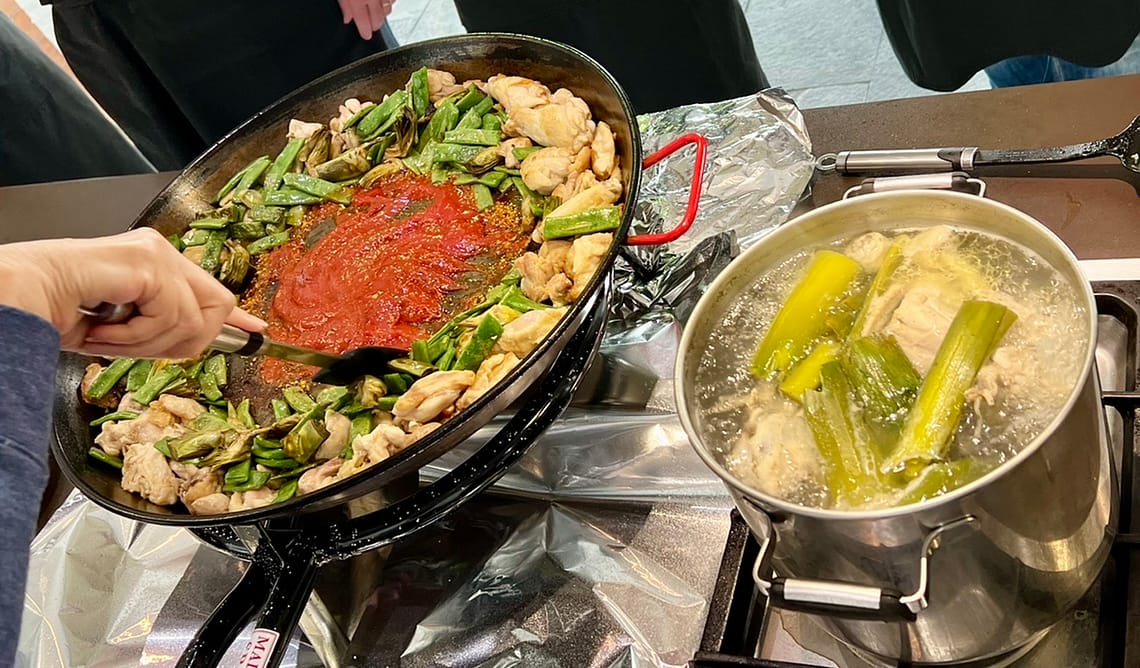 When I travel, food is a huge focus for me. I want to understand and fully enjoy the cuisine of each new place. In fact, my preference is to start an international trip with a food tour – even before touring a city’s major sites! This was no different on a recent trip to Seville Spain. Before we toured the Cathedral or the Alcazar or the Plaza Espana, we went on a tapas crawl with a local guide, and attended a cooking class at the local market. In this post, I’ll tell you about our cooking class in Seville.

Some of the links in this post may be affiliate links. If you buy something after clicking one of these links, I may earn a small commission.  This does not cost you anything extra and helps support this blog.

Taller Adaluz de Cocina offers a market tour and cooking class in Seville. It’s located within the Triana Market. Triana is a residential neighborhood across the river from central Seville. It was historically a working class neighborhood. The Triana market was founded on the banks of the river here 200 years ago. The market also happens to sit on top of the castle ruins from where The Spanish Inquisition was administrated.

Prior to our cooking class, we spent an hour visiting various market stalls, learning about the foods that are essential to the cuisine of Andalucia – this region of southern Spain.

Ariana explained the curing process and the grading system for this nutty-flavored meat. We would eat lots of Jamón in Spain. Not only is it served as a single dish in Seville. It’s a key ingredient in many tapas dishes.

We then learned about the fruits and vegetables unique to this region.

We also learned about Olives – all the different types. And Olive Oil. Spain is the world’s biggest producer. Many dishes here are literally swimming in this golden nectar.

And spices….including Smoked Paprika and Saffron. Smoked paprika is one of my favorite spices and happens to be a speciality of the region. I use it all the time in soups and stews, and now I understand what it is. It comes from a specific type of pepper (seen hanging in the photo above) which is roasted over an oak fire before being ground into powder. It would be a heavily featured ingredient in our class.

I wondered if the market was still an integral part of the local community or if it was mostly a tourist attraction. Ariana explained that locals do shop here, and that the market experienced new-found popularity during COVID as people were forced to shop local.

She also pointed out that the market features various eateries which all seemed quite busy with locals.

Cooking in a Stall

The Taller Andaluz de Cocina cooking class in Seville is set up inside one of the Triana Market stalls. As we learned to cook Spanish food, market activity continued to buzz around us.

We shared the experience with 11 other travelers, mostly from the United States. Dominic – our chef and teacher – introduced himself. He spoke perfect English. We were each assigned a station at the long countertop and were given aprons to wear.

All of the ingredients for the day were already in front of us. As Dom added spinach to a pot for an upcoming dish, he explained that we would be preparing three classic dishes. Andalucia’s favorite soup – Salmorejo. A common side dish – Spinach with Chickpeas. And Spain’s most famous dish of all – Paella.

Salmorejo is simple and delicious. It’s a staple on almost every tapas menu we saw. After learning how easy it is to make while in this cooking class in Seville, I plan on preparing it regularly at home.

It’s a cold tomato soup, but it’s much thicker than Spain’s other more universally famous cold tomato puree – Gazpacho. Looking at the picture, you might think that it is a cream soup. But in fact, the thickening agent is old bread – no dairy at all.

The ingredients are tomatoes, stale bread, garlic, sherry vinegar, salt, and lots of olive oil – all blended together. Hard-boiled eggs, chunks of Jamón, and more olive oil are added to the top.

Our cooking class was divided into two groups on either end of the counter. With six people on our end, we all took turns in the composition of each dish. While some cut ingredients, others blended or fried them.

Dom supervised and made sure that all was done correctly. For example, I was in charge of adding olive oil to the blended tomato/bread/garlic mixture. I was not adding nearly enough. He coaxed a very aggressive pour out of me – enough to turn the mixture from deep red to its characteristic orange color.

The Salmorejo was quick and easy. It was put in the refrigerator, allowing the flavors to blend while we made the other dishes.

This is another common dish in Seville. In fact, we ordered it the night before while out eating tapas. Our cooking class version was much better! A lot of the flavor comes from my aforementioned favorite spice – Smoked Paprika, along with another favorite spice of mine – Cumin. In addition to the namesake ingredients, others include garlic, tomato sauce, olive oil, vinegar, and fried crumbs of stale bread (again the stale bread!)

A Quick Lesson in Sangria

After everyone had worked to put together the Spinach with Chickpeas, Ariana gave us a quick lesson in Sangria. Sangria is often equated with Spain, but Ariana explained that Spanish people never order Sangria in a bar or restaurant. It was invented for tourists many years ago. She told us that Spanish families will drink Sangria at home over gatherings on long hot weekend days. She made her favorite version for us which included the low sugar Spanish soda in the photo (along with red wine and fresh fruit).

(On another tour we took while in Seville, our guide told us that Spanish people don’t drink Sangria at all. I often call Mrs TT The Sangria Queen because it is her summer drink of choice. She was very much looking forward to the Sangria here. However, we never drank any! All in the spirit of authenticity.)

What’s in a Name

While Paella is the dish most commonly associated with Spain, it is not strictly a speciality of the Andalucia area. Still, it is so identified with Spain that it’s easy to understand why its preparation is included in a cooking class in Seville. It’s on menus everywhere in Seville, so a Paella education was very useful as we navigated the restaurants of the area.

Paella actually originated in Valencia. And the version we cooked in class was the original version – Paella Valenciana. Dom explained that word “paella” actually refers to the large flat pan used in making the dish. He told us that any type of rice dish cooked in this pan can be called paella. But that the original Valencian Paella is considered the true original authentic Spanish paella.

Dom first showed everyone how to break down a whole chicken. Various class members gave it try. He then placed all the bones in a pot with some leeks to prepare the stock.

While the stock cooked, class members added various ingredients to the paella pan. First the chicken, then artichokes and beans. (Dom also taught us how to properly shave down and cut up an artichoke – I’ve seen it on Top Chef many times, but had never done it myself until this class). Once cooked, these ingredients were pushed to the sides of the pan. The garlic, tomato sauce, and spices were added to the center and fried for a few minutes, before combining all the ingredients together.

We then transferred the chicken stock through a strainer into the paella pan. Dom pointed out that the pan not only cooks but it measures too. Stock was added until it reached the appropriate mark on the pan.

A specific type of rice, grown in Spain, is used for Paella. It’s short-grained and low in starch. The correct amount for paella was added, again using just the pan for measurement as shown in the photo below. The rice was then mixed in with and cooked for exactly 18 minutes.

We took a seat and all three dishes were served to us, along with our drink of choice. All three were delicious!

While we finished our meal, Dom prepared dessert for us. A blend of lemon sorbet, cava (Spain’s sparkling wine), and fresh mint leaves.

We ended our cooking class in Seville 3.5-4 hours after we started. We spent 1 hour touring the market, a little over 2 hours cooking, and 30 minutes eating.

It cost just under $70 per person – a great price for the quality and length of the experience, plus a 4-course lunch! You can book this tour directly on Viator here. (Keep in mind that prices may change over time)

How much cooking did I actually do? Given the number of people in the class, the hands-on cooking experience itself was somewhat diluted, but it didn’t matter. Attendees did more cooking than Dom the chef, and everyone was cognizant to share in the experience equally.

And Chef Dom not only taught us about Spanish cuisine, he also taught us practical cooking skills as well. The best way to cook garlic to maximize its flavor, how to break down a whole chicken, how to cut up an artichoke, how to roast saffron, among others.

Plus, they email all the recipes afterwards so that I can make them at home.

This cooking class with Taller Andaluz de Cocina was exactly what I hoped for. A great hands-on way to learn about the cuisine in Seville. Topped off with a really good meal!

If you want to read about other great tours that I have taken around the world, click here to read about Canyoneering a Slot Canyon in southern Utah or exploring the Warner Bros Studio in Hollywood.

If you want to read more about food in Spain, then check out my guide to Eating Tapas in Spain

And if you want to read more about traveling in Spain, then check out the other posts in my Spain series

Staying in a Cave House in Setenil de las Bodegas

Searching for the Best Alhambra Viewpoints

A Week in Provence – the Luberon, the Rhône, and Cassis