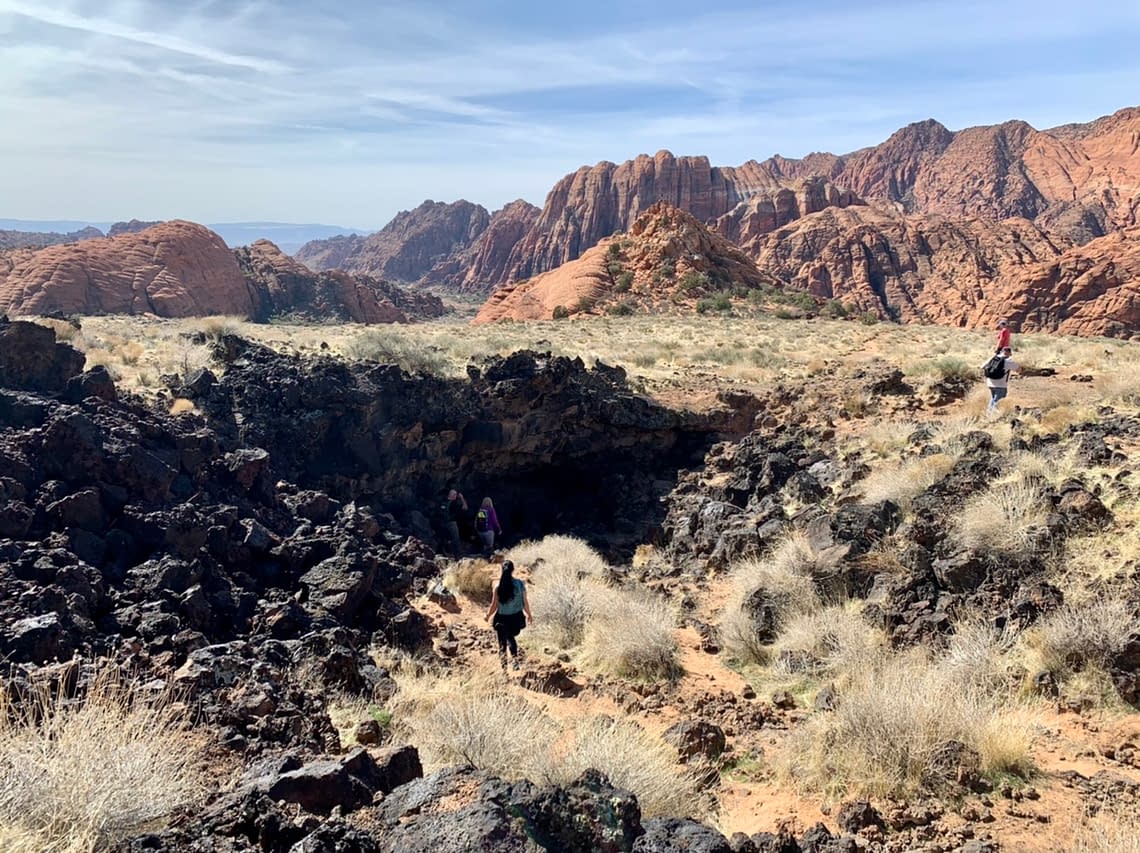 Snow Canyon is an incredibly scenic State Park in Utah’s southwest corner.  It’s located just north of St. George, the area’s largest city, and offers some great hiking opportunities. I’ve been to St. George many times.  Due to its warm climate, this is where many Northern Utahns go for a reprieve from winter.  My Dad grew up in the nearby town of Hurricane. So as a kid, we would visit the area often to see family.  In fact, my parents and two of my brothers have all recently moved to St. George.  I remember going to Snow Canyon once when I was younger. But as is a common theme with my Utah Parks posts, I’d never taken the time to revisit the Park as an adult.

On a recent pandemic road trip to Zion National Park (45 minutes from St. George), I made it a priority to also visit Snow Canyon.  Zion NP is usually very crowded, especially on the weekends.  So during this early March trip, we visited Zion on Thursday and Friday, avoiding the larger crowds. Then, we spent a crowd-free Sunday morning in Snow Canyon State Park.  I think it would take at least two days to see everything Snow Canyon State Park has to offer, but we were able to experience quite a lot in our one morning.  I’ll show you…

An Overlook and An Overview

Our first stop was the Snow Canyon Scenic Overlook. The view here is beautiful and is well worth a stop.  The Overlook is accessed from the main highway that leads from St George to the Park’s North Entrance.  It’s better marked on Google Maps than it is from the road.  Watch closely though and you will see a small sign on the highway’s west side.  A dirt road takes you to the Overlook where you will be greeted with spectacular views out across the valley below to the Park’s red and white sandstone cliffs.

Snow Canyon is not named for the white stuff.  Snow seldom falls in this part of Utah. Instead, Snow Canyon State Park is named for Lorenzo and Erasmus Snow – two Mormon pioneer leaders that played a major role in settling this part of Utah.  In addition to the spectacular sandstone cliffs and canyons, Snow Canyon State Park is known for its Petrified Dunes and for its Volcano Field.  From the overlook, both can be seen in the valley below.

The Petrified Dunes were once sand dunes but over the time turned to sandstone.  And the Santa Clara Volcano Field is extensive lava flow from two nearby volcanic cones that spewed lava throughout the area a really long time ago.  In fact, the Cinder Cone Hike in the north part of the Park, takes you down into one of these extinct cones.

Snow Canyon State Park offers many different hikes, but since we only had one morning to spend in the Park, I was forced to choose just a few. I wanted to hike the Petrified Dunes Trail because, come on, petrified dunes are pretty cool.  And I wanted to hike the Lava Flow Trail because it’s known for its explorable lava tubes – and we came prepared with head lamps to go underground.  Then, the  Butterfly Trail is a short scenic trail that connects the two.

Yep, that’s a pretty cool picture. That is what a petrified sand dune looks like up close. We hiked the Petrified Dunes Trail first. After taking the only trail from the parking lot, it soon splits in two directions. A trail marker guides you towards either the Petrified Dunes trail to the south or the Butterfly and Lava Flow Trails to the north.

Below is the trail map showing the confluence of the three different trails from my Gaia GPS App, which I used for the first time while in Snow Canyon State Park. I found it very useful for showing me exactly where I was during our hiking, especially on the Petrified Dunes Trail (more on that ahead). I did have an adequate cell signal while in this area of the Park (Verizon)

Here’s some of the amazing sites we saw while hiking the Petrified Dunes Trail:

The Trail starts off flat and sandy. The Dunes can be seen rising up in the distance with Snow Canyon’s red sandstone cliffs behind.

Soon, you will find yourself scampering up and down the sandstone dunes and their beautifully variegated surfaces.

Another geologic feature in abundance along this trail are Moqui Marbles. These are small balls of sandstone that are coated by an iron ore. They are most commonly found in Utah and Arizona….and Mars. Yes, Mars has its own version, though the Martian version is formed exclusively from iron ore. The name Moqui comes from the Hopi tribe of Native Americans. They believed the spirts of the their dead ancestors would come down from the heavens at night and play games with the marbles. The spirits would then leave the marbles behind as a sign that they were doing well in the afterlife. Visitors to Snow Canyon also need to leave them behind. It is illegal to remove Moqui Marbles from Utah’s public lands.

AllTrails rates the Petrified Dunes trail as easy. I disagree.  It’s easy for some of its length, but there are several spots where climbing steep sandstone surfaces with very irregular surfaces is required.  Sure-footedness is a necessity. Consequently, I would rate the trail as moderate.

Also, the trail itself is not particularly well marked.  That doesn’t mean you will get lost.  It’s basically a straight north-south trail across irregular sandstone surfaces.  But it’s easy to wander along from one dune to the next, chasing views and cool rock formations, and then find yourself scrambling up and down a bunch of steep surfaces, trying rejoin your perceived vision of where the trail should be.  We wandered off the trail almost immediately after arriving at the first dunes, lost in the natural wonder.  On our way back though, we found that there are small brown metal trail markers attached to the sandstone indicating the official trail.

The Petrified Dunes Trail is 0.6 miles in length (one-direction), though we added to that distance with our off-trail wandering.  At its end, the trail joins the Hidden Pinyon Overlook Trail.  Definitely follow this.  It only adds a quarter mile to the hike and takes you up a small volcanic hill for amazing 360 degree view across the canyon.

After finishing the Petrified Dunes Trail, next up was the Butterfly Trail. Butterfly would take us to our ultimate destination – the lava tubes on the Lava Flow Trail.  The Butterfly trail is 0.5 mile in length and ends by connecting to the Lava Flow Trail.  It’s not a unique hike in and of itself.  It’s basically just a connector trail. But it does skirt past the northern edge of the petrified dunes, and like all trails in the Park, offers great views of the surrounding beauty.  AllTrails rates it as moderate, but I thought it was much easier than the Petrified Dunes trail.

The name Lava Flow Trail accurately describes the trail’s terrain.  The trail itself is covered in jutting lava rock.  Watch your step – it’s easy to trip.

Lava tubes are underground channels that were formed by flowing lava.  Exploring the tubes is this trail’s highlight. We came prepared with headlamps, and I’m glad we did.  A flashlight or phone light would have been difficult to use – both hands were required for scrambling through narrow spaces and over irregular surfaces. Note: those irregular surfaces scratched up Mrs TT’s Apple Watch face – it’s probably best to remove yours before entering.

In my pre-trip research, I had mistakenly read that Lava tube #1 was the easiest to enter. So we headed to #1 first. It’s located north of Lava Tube #2.  But note- it is not the easiest to access.  It’s the hardest!  It has two different possible entrances, but both are very narrow and curved.  My height made it difficult for me to enter.  Mrs. TT was able to wiggle down into the entrance for a bit.

We were quite disappointed at this point, thinking if this Tube was the easiest, we had no chance at the others. But gratefully, as we soon discovered, our sadness was for naught.   Lava Tube #3 is the easiest….

But, next up was Lava Tube #2.  Its entrance was bigger than #1, but I still had to shimmy to get in and out. It’s definitely not for the claustrophobic.

Finally, on to Lava Tube #3. This is the Lava Tube to really explore.  There are two big openings into this tube – one on the east and one on the west. We chose the east side since most hikers seemed to be entering there.  I could walk in standing up and it’s very much like a cave rather than a narrow tube.  Inside there were several chambers and we were able to walk in at least 70 feet. The surface of the tube floor is very irregular with large lava rocks, so good lighting and caution is an absolute must.

Snow Canyon State Park is located within the Red Cliffs Desert Reserve. This 45,000 acre reserve was created to protect the endangered Mojave Desert Tortoise and other indigenous desert species. If you happen to see a tortoise, it’s illegal to even pick it up.

You can find many additional hiking trails in the St. George area outside of Snow Canyon. HikeStGeorge.com is a great resource. And for a look at some other trails in the Park, check out this Snow Canyon post by my friend Jen at LensofJen.org

St. George is booming. It’s the 7th largest city in Utah with a population nearing 100,000. The nearby towns of Washington and Hurricane are also experiencing expansive growth. The area is very popular for northern Utah snowbirds, so it also abounds with second homes. Therefore, vacation rentals are a popular lodging choice. We usually stay with my parents when visiting the area, but to minimize COVID concerns this trip, we rented a condo through Booking.com. It was an excellent choice. I was offered a Booking.com Genius discount, and at $200/night, this 3-bedroom townhouse (1800 sq ft!) cost less than a room at the SpringHill Suites near my parents house.

I personally feel that the dining options in St. George haven’t kept pace with the growing population yet, so I don’t consider it a culinary mecca. But we have eaten good meals at Red Fort, Viva Chicken, and El Coyote Charro.

To learn about 2 other great Utah State Parks, check out my posts on Dead Horse Point and Kodachrome Basin