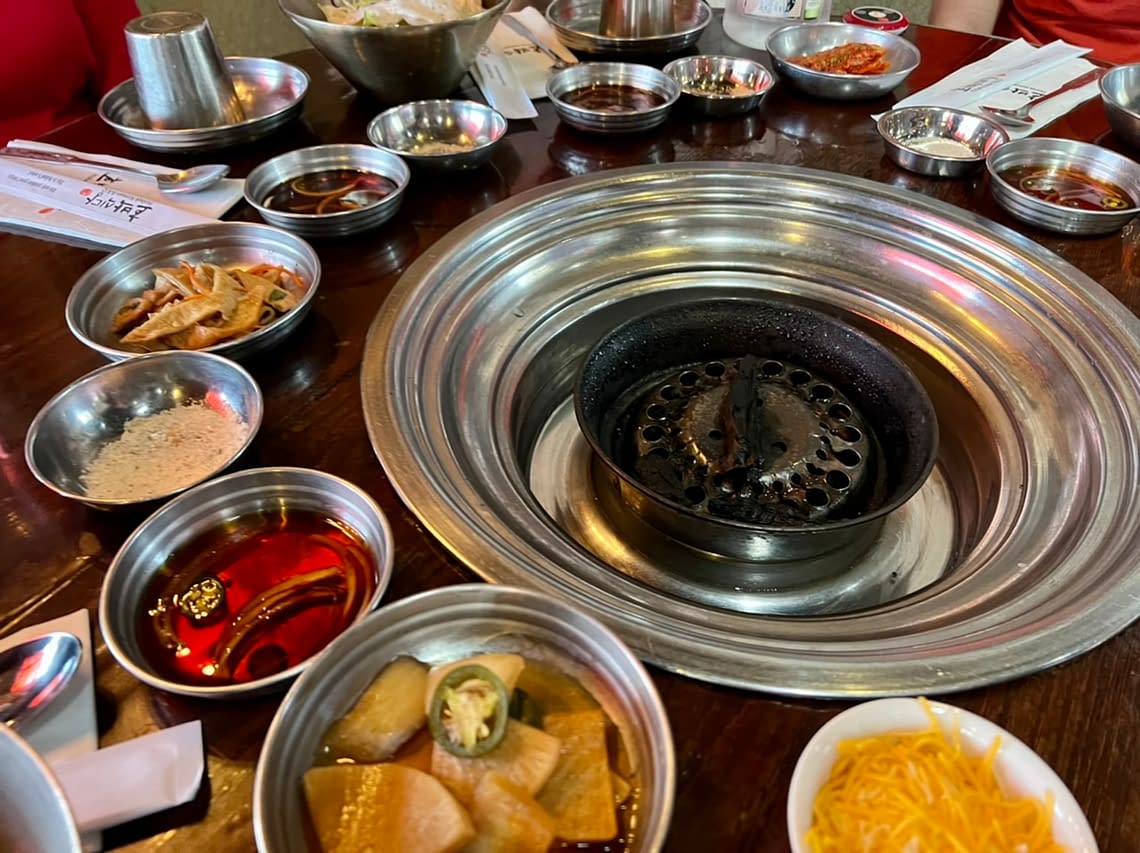 I had long avoided Korean food.  Which is odd because I love eating a variety of cuisines and discovering new food.  Especially when I travel.  In fact, I consider seeking out great food to be one of the great joys of travel.  And I love every other kind of Asian cuisine. But for me, Korean food was taboo for decades.  However, during a recent 24 hour stay in Las Vegas, eating Korean cuisine became my food focus.  Let me tell you a little bit about my Korean food history, and then show you some of the great Korean food I found in Las Vegas.

A Long Ago Trip to Korea

33 years ago, I spent a few weeks in South Korea with my younger brother and parents.  My brother Bryan had just finished living there for two years, and we all went over to tour the country together before he returned to the US. Needless to say, he was an expert on Korean cuisine and was excited to introduce us to the food.

And, I found that I didn’t really like it…at all.  I recall thinking that the flavors were too strong and too unusual.  While he was extolling the virtues of kimchi and slurping soup so spicy his nose would run (a lot!), I remember resorting to seeking out a lot of fried rice. I also clearly remember the great relief of finding a ham sandwich on a hotel menu.

Kimchi in the Fridge

In the years that followed, I never gave Korean food another chance. Bryan and I lived together for several years in college, and our refrigerator almost always had a jar of Kimchi. And I would always complain about its stinky presence. He’d pull it out, throw some Kimchi on his food, and look at me with a gloating sense of satisfaction, knowing that it was really bugging me. This made me even more determined to never eat it….ever.

But then a small fast casual Korean BBQ place opened up near my office earlier this year, right on my route home.  And one day I thought…why not?  I now consider myself a Foodie, my palate has evolved, and I decided it was time – after 30+ years – to give it another chance.

So I walked in, ordered some Beef and Chicken Bulgogi (served with a side of Kimchi).  And…..it was delicious!  Even the Kimchi!! I immediately texted a picture of it to my brother with an apology for the years of disrespect to his beloved cuisine.  I’m sure he wept tears of joy. And then I went to the grocery store and bought a bottle of Kimchi to put in my fridge.

Meeting Up in Las Vegas

I don’t see Bryan very often anymore.  He lives in a different state and the chance to get together doesn’t come up nearly enough.  The last time was for a football game two years ago.  Once again, the chance to get together for a football game arose earlier this month.  We both decided to meet up in Las Vegas and watch our University of Utah Utes play Oregon for the PAC-12 conference championship. This would be our first time together since my new found love of Korean food.

It was going to be a quick 24 hour stay in Vegas.  Dinner would be at Allegiant Stadium.  We would have time for two lunches together.  I called him and suggested that we eat Korean for both of them.  I wanted to revisit the cuisine with him as a food guide. Of course, he loved that idea.  Plus, my parents were coming along.  A chance for us all to come full circle on our Korean food discovery from decades ago.  My Mom also didn’t like the food in Korea, and was equally relieved with that ham sandwich back in the day.

Because I am the Tripper of the group, I selected the restaurants for us. And I chose the top 2 Korean food places in Las Vegas according to Tripadvisor – Komex and Hobak Korean BBQ.  I looked around online at other Las Vegas Korean food guides too (since I never depend solely on Tripadvisor), and they were both consistently listed on all of them.

Komex, located in a North Las Vegas stripmall, has been a long-time Las Vegas favorite for good cheap food. It’s been on multiple Las Vegas “Best of” lists and has been featured on the Food Network. It’s a Korean-Mexican fusion restaurant.  The menu features straight-up Korean dishes, straight-up Mexican dishes, and dishes that feature a combination of the two.  You can also get American favorites featuring the Korean spiced meat called Bulgogi.  Plus, even with the Korean menu items, you get chips and salsa first!

So while I knew that our meal wouldn’t be purely Korean, I knew the flavors on this fusion menu would still be great.  Famed chef Roy Choi, credited with inventing Korean-Mexican fusion from his LA food truck, has a new restaurant in the Park MGM hotel called Best Friend.  We would have tried to eat there, but it is only open for dinner.

We all ordered from the Korean side of the menu. My mom – who I discovered had developed an appreciation of Korean food long before me via other meals with my brother – enjoyed her Korean taco. Mrs. TT loved her grilled cheese sandwich filled with Beef Bulgogi.  The rest of us ate Bulgogi rice bowls.  All the grilled meat had great flavor with its Korean spices.  My only complaint is that the bowls came with only a little bit of Kimchi. A less flavorful coleslaw mix was featured more predominantly. Remember how the strong flavors turned me off in Korea?  Ironic that I missed them here. The red chili sauce included with the bowl in a small side cup did add some of that flavor though.

A More Traditional Meal at Hobak

Hobak is a more traditional sit-down Korean BBQ restaurant located in the Las Vegas Chinatown district, about 2 miles west of The Strip.  This dining experience was much more reminiscent of meals we ate in Korea.

A Table Covered in Banchan

As my brother Bryan is explaining in the photo below, a Korean BBQ meal features a gas grill in the center of the table for cooking the Bulgogi, with surrounding bowls of various side dishes called Banchan.

Our banchan at this meal included chilled radishes, pickled tofu, pickled onions, a pancake, various kinds of salad, a spicy red pepper miso soup with tofu & beef, and of course my former nemesis….kimchi.

The main feature of a Korean BBQ restaurant is the meat. We ordered Hobak’s large Family Combo. We were told that the large size would feed 3-4 people. There were six of us, but we figured we could order more if needed. We were able to choose four of several different meat options from the large menu. We went with beef brisket, pork belly, aged pork ribs, and spicy beef short ribs. Shortly after ordering, all the raw meat was placed on a tray next to our table. The two different rib selections continued to marinate in seasonings while the brisket and pork belly were cooked first.

A BBQ Extravaganza Before our Eyes

First up was the brisket. Our server placed it on the table grill, tending the meat off and on, while it cooked in front of us. The rising smoke was captured by the evacuator above.

Once the brisket was finished cooking, we dug in, dipping it into a spiced soy sauce, and eating it along with mouthsful of rice and kimchi.

Next up, the pork belly, which started out whole, but was then gradually cut down into smaller chunks by our server as it cooked.

We then moved on to the marinated meats. First the pork ribs, and then the spicy beef short ribs. The beef marinade created a fiery display as it cooked.

As we worked our way through each successive meat course, side dish refills made their way to the table at our request. By the time we finished, the table was just as full as our stomachs. The large Family Combo was more than enough for all of us.

I remember that while in Korea, I was instructed to eat the Bulgogi, along with rice and kimchi, all wrapped up in leaf of lettuce. Bryan confirmed that memory during the meal. He also felt that while this experience was somewhat typical of a restaurant meal in Korea, the Banchan side dishes lacked some of the variety seen in Korea, and the un-marinated meats didn’t pack the typical amount of spicy flavor. But overall, he was quite satisfied. And so were we! Trying the different Banchan, watching the Bulgogi cook in front of us, eating family style with an ever-growing number of dishes, plus the delicious food (including Kimchi), all made for a great overall dining experience.

So if you are looking for quick and easy Korean food in Las Vegas, check out Komex. If you want the full Korean food experience, then definitely make your way to Hoback Korean BBQ. And if you want convenient access to Korean flavors all the time, keep some Kimchi in your fridge like I do now.

I do like to eat. And if I wasn’t on a quest for Korean food in Las Vegas, I might have chosen the Mexican side of the Komex menu. Check out my posts about two great Mexican restaurants in my hometown Salt Lake City – Red Iguana and Los Tapatios. And if you want more insight into another great Asian cuisine, then check out my post on the Food of Japan