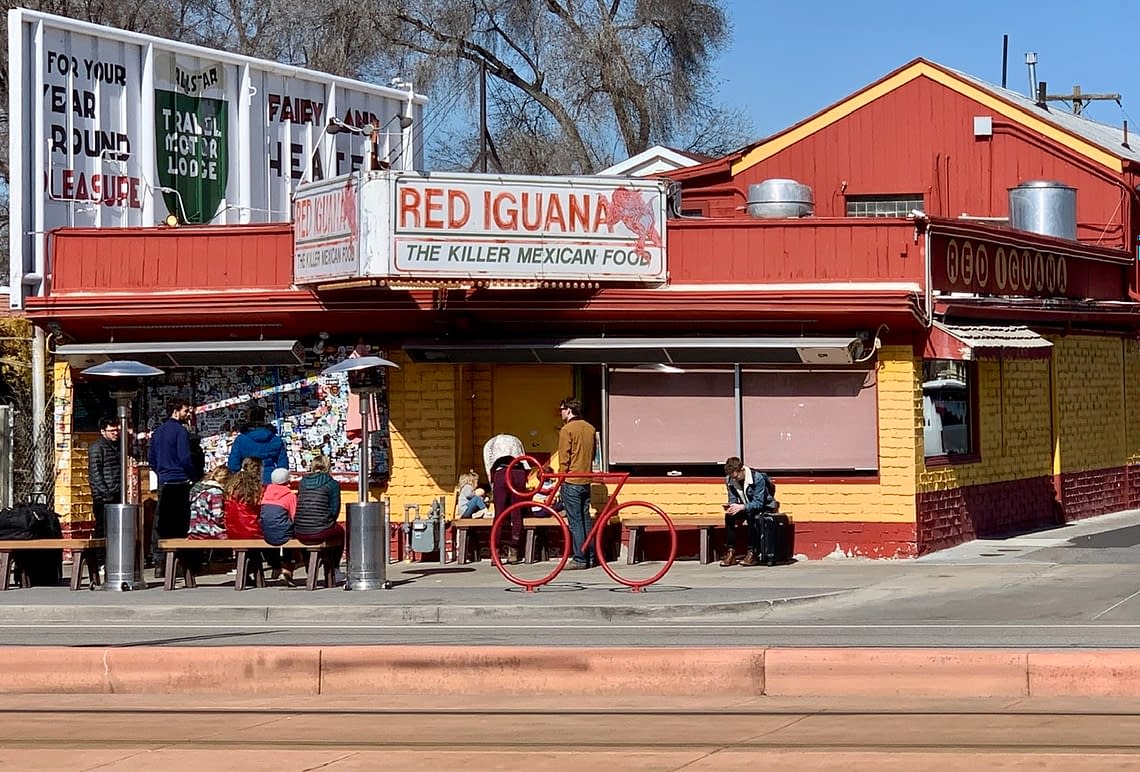 Food is one of the top reasons I love travel.  There is nothing quite like discovering great food in a new place.  Experiential travel also means experiential eating – seeking out local restaurants and cuisine. I want to try the food that defines a place, and eat out amongst the locals.  I’ll spend a lot of time in my tripping process seeking out a great travel meal – scouring Tripadvisor, Open Table, and other travel blogs for the best eating experiences in each place we visit.

Since we are currently living through a time of travel reflection rather than actual travel, I’ve found myself thinking back on recent travel meal favorites.  Here are some of my most memorable travel meals over the last 1.5 years.

I grew up eating Top Ramen. At some point in college, I started adding ingredients to make it more nutritious – chicken, egg, snap peas, etc. I must have been aware that real ramen in Japan was more involved. Or maybe I just didn’t want to be hungry again in an hour, so I figured that protein would help. Authentic Japanese ramen places have started to pop up in the US, including my home base of Salt Lake City. They certainly represent a step up from my college ramen and are pretty darn close to the real thing. But eating ramen in Japan?  Come on…that’s bucket list material!!

While in Kyoto Japan, we ate ramen three different times and there are many styles of ramen in Japan. My personal favorite was at Ramen Hiwamatanoboru near the Fushimi Inari Shrine. This version had a very rich thick pork broth – almost like a light gravy.  The eggs were perfectly soft boiled. The pork had a light char to it, adding a depth of flavor.  I can never eat Top Ramen again.

Our flight to New Orleans arrived late and my plans to see Jon Cleary playing in a local bar had to be scrapped. We were hungry and in one of the world’s best food cities. There was a long line at my Plan A restaurant – the ACME Oyster House in the French Quarter.  We walked across the street and joined the shorter line at the larger Felix’s Restaurant and Oyster Bar.  After a few minutes we were seated at the bar, and a few minutes later we were eating char-grilled oysters and sopping up the buttery juices with grilled bread.  We also ordered New Orleans classics – jambalaya and crawfish étouffée.  But, it was the oysters though that stole the show.  We went back one more time for more charred deliciousness before the trip ended.

Best Meal in a UNESCO City of Gastronomy

Tucson Arizona is one of only two UNESCO Cities of Gastronomy in the United States.  San Antonio is the other. The lengthy UNESCO criteria for this designation includes a “well-developed gastronomy characteristic for the region”, and a “vibrant gastronomy community with numerous traditional restaurants and/or chefs.

We did eat a lot of great food in Tucson, but my favorite meal was the Camarones Culichi at Mariscos Chihauhua – a small Mexican restaurant that traces its beginnings to Nogales Mexico. The menu says that this is the dish that made them famous, so of course, we had to try it! Camarones Culichi features seasoned shrimp served in a mildly spicy green chili sauce. It came with rice and included some of the best homemade tortillas that I’ve ever eaten – thick, chewy, warm, with great corn flavor.  So good!  Plus, their $6 margaritas were huge and they didn’t skimp on the tequila.

Best Meal I Stood in Line For

When I travel, I absolutely have to try each location’s most iconic cuisine.  Nashville is famous for its Hot Chicken – and Hot means Spicy.  This is Spicy Fried Chicken. There is lots of debate online about where you will find the best Hot Chicken in Nashville, and some sort of hot chicken presentation is very common on many Nashville menus.   After my usual thorough research, I decided to go with Hattie B’s in Midtown Nashville – a short Uber ride from our downtown hotel.

When we arrived, there was an expected line out the door which wrapped around the corner of the building. It moved fairly fast – maybe 30 minutes in all, so not too bad.  As the years have passed, my ability to tolerate spicy food has also passed, so I had to go with the mildly spicy option.  Hattie B’s offers 6 different levels of heat. The chicken was very juicy with just enough spice to add great flavor without angering my esophagus.  I ordered greens and black-eyed peas on the side.  We finished things off with some Peach Cobbler.  We ate while seated on picnic tables on their enclosed porch – the perfect ambience for a casual Southern classic.

Hiroshima is famous for its cabbage pancake called Okonomiyaki.  In fact, Okonomiyaki is so popular in Hiroshima that there is an entire building filled with okonomiyaki counters called Okonomimura.  I used Tripadvisor to help me decide on a counter called Ron.  Our counter manager/guide at Ron was a Japanese American guy from California and was very helpful in guiding us through the process involved with this meal.

A meal in the Okonomimura building is definitely experiential.  Sitting at the communal counter, watching these huge mounds of food being prepared and cooked, is a big part of the dining experience.  They start with a pancake batter which is then topped with cabbage.  At certain points through the process, bacon, egg, noodles, the largest pile of green onions ever, special tangy sauce, and other proteins of your choice are added (I opted for the large local oysters).  It is served to you right on top of the counter grill, and you are given a sharp spatula to help cut it into more manageable pieces.  Are they tasty?  They are good, but again, the experience is the highlight here.

Don Yayo is a roadside sports bar in Atenas Costa Rica, a small town located about 30 minutes west of San Jose.   It has a big open entryway that faces all the traffic driving back and forth on the busy main roadway a few steps away.   Whenever I’ve been there, it’s always full of locals rather than the expats that also populate the Atenas area  – always a good sign for great travel eating.  Online reviews suggested that they make the area’s best Chifrijos – a typical Costa Rican dish, so that’s what I ordered.   Chifrijos consists of tender flavorful deep fried pork cubes sitting on top of seasoned rice and beans.  It’s a simple meal, but perfectly executed simple local meals are often the best.  This has been my single favorite dish on two separate trips to the area in recent years.

I’m not a traditionalist in any sense, and so I don’t require turkey on Thanksgiving.  We ate at Sylvain in the French Quarter.  They offered two prix fixe Thanksgiving meal options – only one featuring turkey.  But they also allowed ordering off their regular menu.  So I had their Pan-Fried Pork Shoulder which was served on a bed of grits and greens and served with a mustard jus.  The food was great and the servers were all very gracious despite having to work on a holiday.  After that, it was very hard to go back to turkey this last Thanksgiving.

Jaco is a popular Costa Rican beach town on the Pacific side of the country.  The Green Room is my favorite restaurant in Jaco. I have eaten there many times and it never disappoints.  The Green Room offers high-quality locally-sourced organic eating.   While traveling in Costa Rica earlier this year,  we stopped into The Green Room for lunch between our morning crocodile tour and our afternoon lounging at the beach. I ordered their tuna sandwich, which may be the best fish sandwich that I have ever eaten. It featured a thick slab of seared fresh tuna, perfectly spiced guacamole, and a pineapple slaw, served on a soft multi-grained bun.

Home-cooked means hometown eating, and my favorite restaurant near my home is Red Iguana.  If you are visiting Salt Lake, and love authentic Mexican cuisine, then Red Iguana is a must-eat destination for a great travel meal. Red Iguana is famous for its mole – the complex Mexican sauce with an abundance of ingredients including chilis, nuts, vegetables, and sometimes chocolate.  At Red Iguana, they serve many different types of mole with varying levels of heat.   If you don’t know which to order, they will bring you out a small sampler plate with all their moles to try first.

My go-to meal here is the Verdes Enchiladas & the Red Pipian Mole.  The Enchiladas are filled with shredded chicken in a light sour cream sauce and then covered with Mole Verde – a mole made with chili poblano, sesame seeds, jalapeño, zucchini, and avocado to name some of its ingredients.  The Red Pipian Mole is tossed with shredded chicken and served with rice/beans/tortillas.  Some of its ingredients include pumpkin seeds, peanuts, guajillo chilis, onions, and tomatoes.  I once told my wife that if I ever find myself in the unfortunate circumstance to request a last meal, this meal would be my choice.

Lately, we’ve had to satiate our eating-out needs with takeout only.  My favorite takeout meal during the pandemic has been from Sauce Boss Southern Kitchen in Draper Utah – a suburb of Salt Lake.  It may be hard to believe that you can find great soul food in Utah, but you can, and eating Chef Julius’s food feels like travel eating.

We took home Shrimp and Grits along with sides of collard greens and black eyed peas, both slow-cooked with bacon for extra flavor.  It came with a thick wedge of moist cornbread.  I like his grits because they aren’t super cheesy – I feel that too much cheese masks all the other flavors in this iconic Southern dish.   And yes, for those of you keeping score, this is the third time collard greens have made this list of favorites.  I do love greens – and these were the best of the three. Yep, better than Nashville and New Orleans.  Oh man, I think I need to order some food from the Sauce Boss tonight!