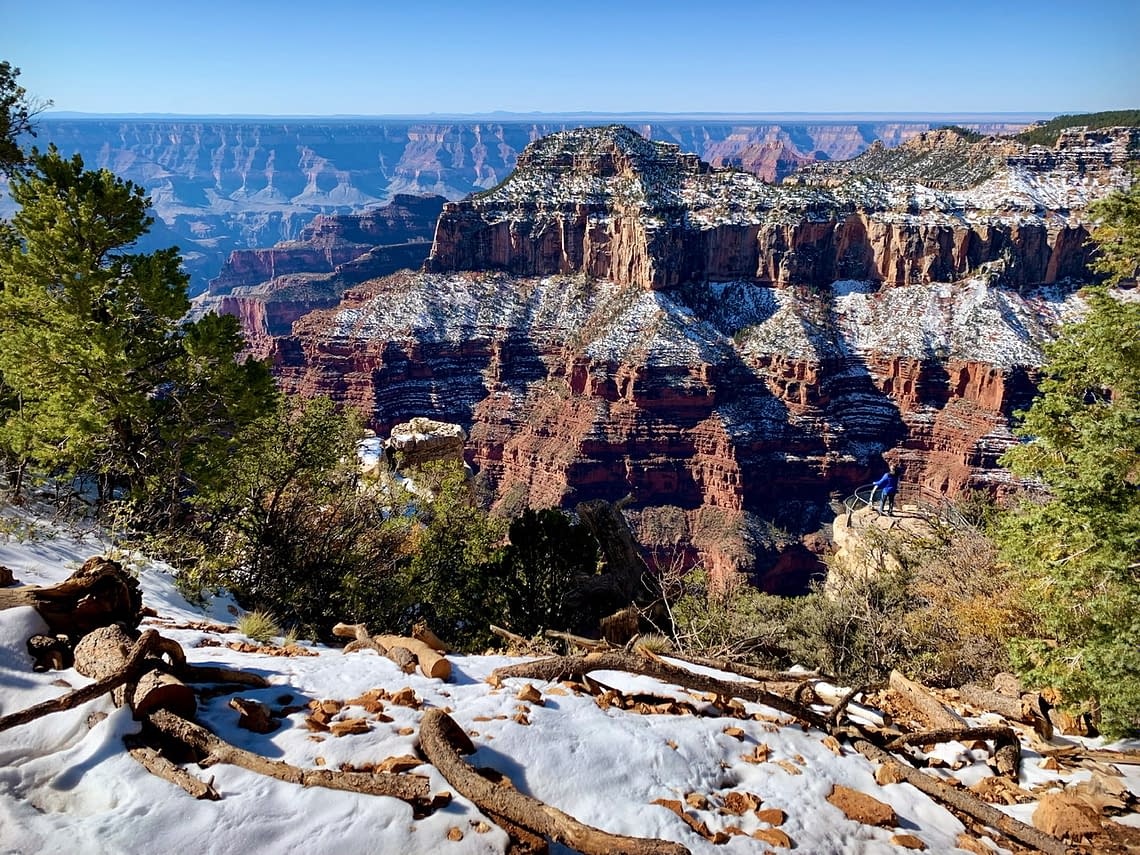 I’d only been to the Grand Canyon once.  I was 18.  Me and a friend took a road trip from our home in Northern Utah to Phoenix. On the first night of our trip, we pitched a tent in one of the campgrounds near the Park. We then drove over to the North Rim of the Grand Canyon the following morning.  It was a Chevy Chase visit though.  Like in the movie National Lampoon’s Vacation (which had been released that same year), we got out of the car, walked over to the edge, took a look, said “yep, it’s the Grand Canyon”, and then headed off to Phoenix.  I don’t remember spending any more than a few minutes.

For my return to the North Rim of the Grand Canyon 38 years later, I hoped for much more.  We only had one day to visit as part of a recent road trip, and I planned on making the most of it.  I envisioned hiking several of the trails near the Lodge before lunch, and then spending the afternoon exploring the sights along the nearby Scenic Drive.

What I didn’t plan on was snow.  And icy trails.  And a closed Scenic Drive.

Even though I pride myself in my trip preparation (I am The Thorough Tripper after all), the experience of travel is often strewn with the unexpected. It’s impossible to plan for everything.  There is nothing more satisfying than having your exact vision for a travel experience come to fruition.  But it’s a rare occurrence.  The unexpected is always part of the travel adventure.  And improvisation is a big part of any travel experience

Here’s how our day at the North Rim of the Grand Canyon actually went….

The Start and My Vision

The day started in Kanab – a Utah town just across the border from Arizona and only 80 miles from the North Rim.  I’d been watching the weather closely, and a cold front had moved through Utah and northern Arizona in the days before our trip.  I knew that the temperatures would be colder than usual, and we were prepared with plenty of layers, hats, and gloves.  The North Rim sits between 8000-9000 feet. So it can certainly be cold in mid October, even without an unseasonable drop in termperature. The forecast was for a high of 45 degrees and so we delayed our morning start to avoid freezing early temperatures.

The 1.5 hour drive from Kanab to the North Rim is a beautiful one.  You drive south and then east through the high desert with views of the vermillion-colored cliffs of the Grand Staircase to the north, before turning south and climbing up through high mountain valleys surrounded by pine forests.

As we climbed higher during our drive, I noticed that the valleys were covered in snow, but was too struck with the beauty of the fall leaves contrasting with the white snow to even consider that there would be snow at the North Rim too.

While driving, I was thinking ahead to how the day would go.  Walk out to Bright Angel Point for the views.  Then spend some time hiking a few miles along the Rim on the Transept Trail.  Back to the Lodge for lunch. Then, an afternoon exploring the sights along the Scenic Drive.

The gate for Grand Canyon National Park sits 12 miles from the Visitor’s Center and Lodge.  We arrived at 10:30am – pretty much exactly when I wanted to. But it was here, with lots of snow still in the surrounding valley that I began to finally realize that we might have a snow problem for the day.  But certainly the main trails around the Visitor’s center would be OK, right?  They face the sunny south after all.

The turnoff for the North Rim’s scenic drive sits about 3 miles north of the Visitor’s Center.  As we approached, my heart sunk.  There was a long chain across the road with orange cones lined along it for good measure, and a big sign that said Road Closed.  Well, there goes the afternoon, I thought.

We completed the short drive that remained to the Visitor’s Center parking lot. It had been cleared of snow by plows, but lots of snow and ice was visible on all the surrounding walkways.

Could it be a second Chevy Chase visit to the North Rim of the Grand Canyon?

Undeterred, I thought that certainly the trails along the sunny rim would be fine, as I strategically looked for patches of dry asphalt along the often icy route to the Lodge. Plenty of other visitors were also gingerly making their way along the paths, too.  I wondered how many hips or wrists might break over the course of the day.

If I’d had any inkling of snow and ice, I would have brought our spikes that hang in my garage for icy days at home. But I only checked the temperature forecast for the day of our visit. I hadn’t paid attention to the North Rim precipitation in the days before our visit.

My first stop was the Visitors Center to ask about the Scenic Road.  I was hopeful that the closure was simply due to morning ice.  The ranger inside wasn’t entirely helpful.  I asked if it would reopen.  His answer was – Noon, maybe…just depends.  That’s all I got from him.  He was a ranger of few words.

The pathways around the Lodge were still quite icy. Rather than continuing to negotiate them to the Rim, we walked through the Lodge, where we were greeted with our first view of the Grand Canyon.  Spectacular even from indoors.

On either side of the Lodge are two viewing porches. The west porch was closed due to snow and ice, but the east porch was open.  I believe that this is where I had my Chevy Chase moment 36 years ago, and where it immediately seemed I would be settling for a similar moment this time. I could see that the path out to Bright Angel Point was covered in ice.  So much for my hoped-for clear hiking paths along the sun-soaked North Rim.

I did make an attempt to get out to Bright Angel Point. I gingerly negotiated a few alternative paths to the main trail, but ultimately wasn’t comfortable with the amount of ice.  There were plenty of patches of dry asphalt, but too many slippery ice-covered steep areas too.  Many visitors did carefully pick their way along these areas.  I however, know far too many people who have slipped on ice back home and broken bones.  That’s not risk I could afford.  I did make it down a little ways before the trail became steeper than I was comfortable with in the slippery conditions, and was able to capture this shot.

The path to the Transept Trail – my hoped-for main hike of the day – was also icy and difficult to reach.  So that activity was also quickly crossed-off the list.

We ended up just settling for some time sitting on the east porch, soaking in the views for a bit. Longer than Chevy…

After an hour at the Park, it was 11:30. I had decided to wait and hope the Scenic Drive did indeed open at Noon.  So it was perfect amount of time to grab a quick lunch.  Because of COVID, the restaurant in the Lodge was closed, but takeout food was available at the Deli in the Woods – also attached to the Lodge.

I walked over and tried to open the door. It was was locked.  Lights were on though.  An employee walked out and told me that the Deli didn’t open until 11.  Confused, I looked at my watch.  It was 11:30.  And then I remembered, the time changed when we crossed into Arizona – the state that doesn’t observe daylight savings time.  Another 1.5 hours before the Scenic Road “might” open.

So, off I went to try and find another route to the Transept Trail.  I really wanted to see more of the Canyon.  To no avail….

Once we could purchase lunch, we were able eat it in the Lodge dining room, with its massive picture windows.

At the “new” noon, we headed the 3 miles up the road to the Scenic Drive turnoff with fingers-crossed.  And it was open!  Finally, something went according to plan on this day.

The Scenic Drive at the North Rim winds 22 miles through pine forest to Cape Royal and its commanding views over the Canyon.  7 miles up the road, there is a branch in the road that takes you another 3 miles to Point Imperial – the tallest point on the North Rim.

We stopped at Point Imperial first. Since the road had just opened, we were the second car in the parking lot, and had the Point mostly to ourselves.  The short main trail out to the viewing area was clear.  No snow. No ice.  Despite its 8800 foot elevation, the direct sunlight along the length of the trail had cleared the path.  Views here look out to the east side of the Grand Canyon.

We then drove the 18 miles to Cape Royal.  I had overheard another ranger telling some visitors back at the Lodge that the views here were the best of North Rim, and that no visit to the North Rim was complete without seeing them.  Glad we made it!

The trail here was also free of ice and snow.  It’s a flat 0.8 mile round trip walk out to the main viewing area.

Along the way, there is an area to step off the Trail and photograph Angel’s Window – a natural arch in the Canyon’s wall.

A branch of the trail then takes you directly onto the top of Angel’s Window.  The narrow rock passageway on top is guarded by rails to help protect from the several thousand foot drop below. Regularly readers know that I am height-phobic, and so it was with sweaty palms and racing heart that I made my way out to the edge.  But I did it, and even looked down briefly over the edge.

We then followed the trail out to the several viewing areas located at the end of Cape Royal.  The view here is commanding.  Out across the Grand Canyon in all its glory – to the east, south, and west.

As we made the 2 hour drive from Cape Royal back to Kanab, I reflected on my second visit to the North Rim of the Grand Canyon.  What started out with a suprise snow cover and a certain repeat Chevy Chase visit, turned out to be a pretty good day after all.  Sure, I didn’t make it out to Bright Angel Point or hike the Transept Trail with its views of the canyon below.  But I did get some nice photos of a snow covered North Rim and still experienced all the grandeur from along the Scenic Drive.

Travel will always present the unexpected.  And you just have to roll with it. Because it’s always worth it in the end.

A Weekend in Sunny Tucson Arizona

My Thorough Guide to Kyoto Japan