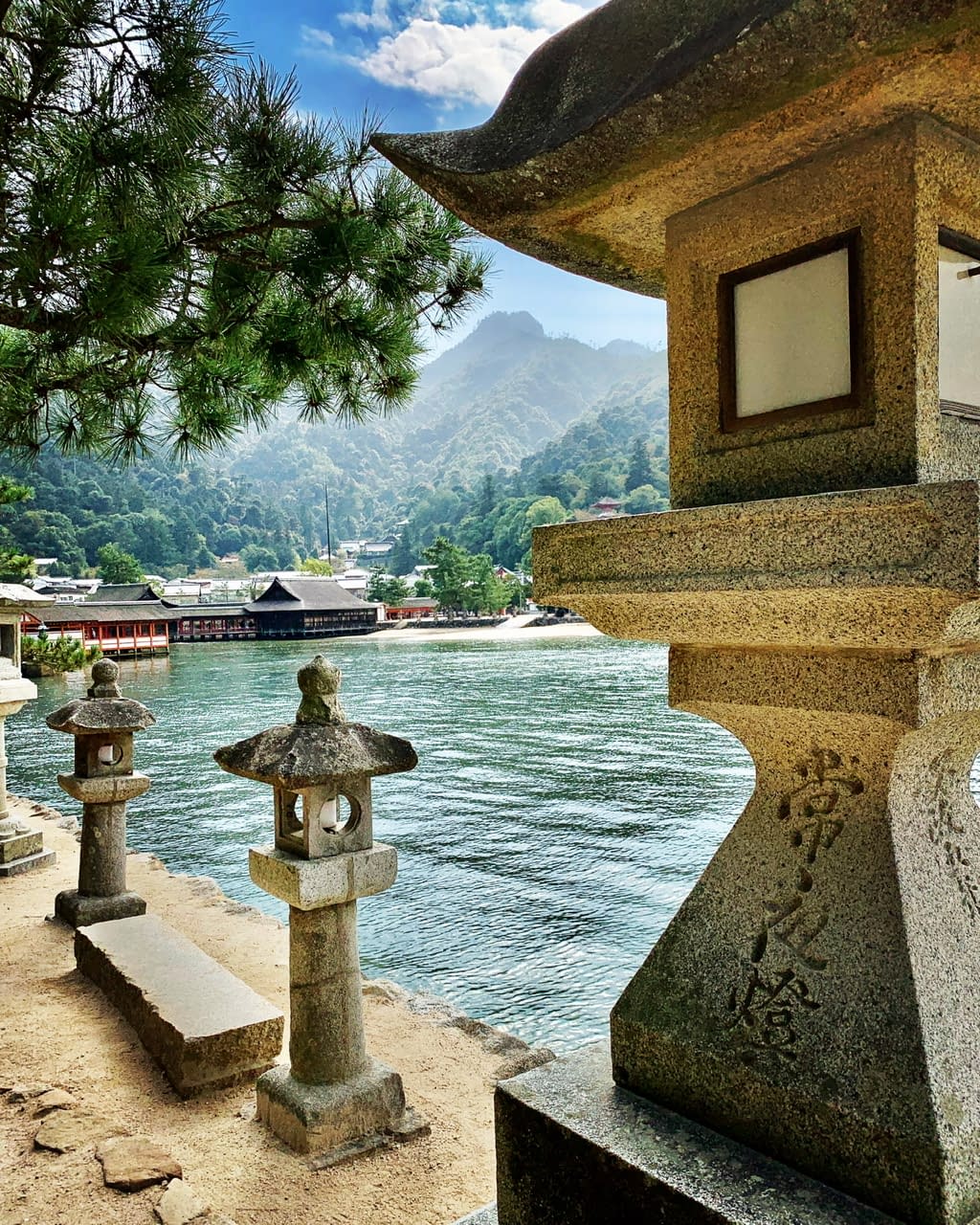 Miyajima Island is one of Japan’s top tourist destinations. This beautiful island – also known as Itsukushima – is located just south of Hiroshima. In ancient times, God was thought to live on the island. It’s certainly beautiful enough – if I was Diety, I could see myself choosing to live there. Miyajima Island can be quickly accessed from Hiroshima as a day trip, or it would be a wonderful place to spend a few days, staying in one of the island’s small hotels or Japanese guest houses. It boasts one of Japan’s most famous landmarks, a beautiful mountain temple, a Japanese maple tree park, mountain hiking, a small seaside village, and great seafood. We spent a day exploring Miyajima Island as part of our 9-day Japan itinerary. Let me show you its top sites.

Some of the links in this post may be affiliate links.  If you buy something after clicking one of these links, I may earn a small commission.  This does not cost you anything extra and helps support this blog

The Itsukushima Shrine is one of Japan’s most visited sites and is famous for its large red torii gate sitting in front of the seaside shrine out in the ocean. This Shinto shrine dates back to the 12th century, though it has been rebuilt a few times since then.  The shrine’s main buildings are constructed on stilts over the water.  Supposedly, it was constructed like this so worshipers could visit the shrine without setting foot on the holy island itself – commoners weren’t allowed on the island in ancient times.  The Shrine is listed as a National Treasure of Japan and is a UNESCO World Heritage Site.

During our visit, the famed torii gate was undergoing restoration and covered by scaffolding.  I was disappointed enough by this that I almost didn’t visit the Island. This would have been a huge mistake! But, I poutingly didn’t take any pictures of the covered gate.

We did walk through the shrine.  Honestly, I didn’t think the building itself was all that impressive.  But the views out across the ocean and up to the sacred mountain behind are beautiful (certainly, the prime reason the shrine was built on this spot).  I was more impressed with some of the smaller touches I found while walking through shrine….

This temple complex is located up along the side of the holy Mount Misen directly behind the shrine.  Just a short walk through some of the quieter streets of Miyajima takes you up to its entrance.  This Buddhist mountain temple was my favorite temple during our entire trip in Japan and my favorite site on Miyajima!

Daisho-in Temple consists of several buildings progressing up the side of the mountain, along with small gardens and grottos.  If it’s possible to have a site remind you of something straight out of a cartoon, I kept thinking about the mountain temple in Kung Fu Panda the whole time I was there.  The buildings are varied and beautiful, the grottos and shrines are peaceful, and the views up to the top of the mountain and down to the ocean are spectacular.  Plus it really seemed like a working temple as opposed to a tourist site.  There were only a handful of tourists (at mid afternoon), and several monk-led ceremonies were quietly taking place as we explored the various levels of the complex.

Momijidani Park is one of Japan’s most famous maple tree parks.  Like Diasho-in Temple, it’s located behind the Itsukushima Shrine up along the mountainside.  We took a well-marked pathway cutting across to the park directly from Daisho-in’s main gate.  We were visiting in late October, a few weeks before peak fall foliage.  Still, the leaves were just beginning to turn and it was beautiful.  Maple trees, streams, waterfalls, and even a coy fish pond.

From the Park, a popular trail leads to the top of Mount Misen.  Alternatively, a cable car called the Miyajima Ropeway will give you less strenuous access to the top. We didn’t have time this trip.

Walking down from the Park, back into the main village, you can’t help but have your eye drawn to the Toyokuni 5-story pagoda and the adjacent Senjokaku Pavilion.  The large wooden Pavilion was constructed in 1587 as a place for monks to gather and chant for fallen soldiers.  You can enter the building and admire the craftsmanship while also taking in  the view out across the Shrine below and Mount Misen above.

The Omotesando Shopping Street runs in between the ferry pier and the Itsukushima shrine.  It is only a few blocks long, and offers a collection of souvenir shops, street side food vendors, and restaurants.  It’s a great place to sample the huge oysters that are famous in this area.  Vendors grill them streetside,  or you can sit down and enjoy them inside one of the local restaurants.  If you don’t fancy oysters, you’ll find plenty of other food options along this street.

We ate lunch at Kakiya, located midway through the shopping street.  The menu selection was oysters-only, but that’s why we were there, after all.  We ate chargrilled oysters in the shell, deep-fried oysters, and stewed oysters in a flavorful broth served with rice.  Each version was delicious and it would be hard to pick a favorite, though to my surprise, I would choose the fried oyster.  It was deep-fried in a light crispy batter, and the oyster had an almost-creamy consistency in the center.

How To Get to Miyajima Island

We visited Miyajima as part of a two-day side trip from Kyoto. We traveled to Hiroshima on the Shinkansen (bullet train).  Many of these speedy trains connect the two cities daily, and the  journey takes less than 2 hours.  The round trip cost is approximately $220.  Yes, bullet trains trips in Japan are expensive!  But, you can reduce your transportation costs in Japan by purchasing the Japan Rail Pass online ahead of your trip.  If you plan on at least two bullet train journeys, it more than pays for itself, plus it covers local JR trains as well.  Japan Rail offers money-saving regional passes too.  The Kansai-Hiroshima Regional Pass would be perfect for those traveling to Hiroshima from Osaka or Kyoto. Click here for more information and pricing on the Japan Rail Pass and regional passes.

Alternatively, a cheaper but much longer bus ride (approximately 6-7 hours) connects Hiroshima from the Kyoto/Osaka area. For those visiting from Tokyo, direct flights connect the two cities.

From Hiroshima’s large central train station, a 25-minute ride on a JR train connects to the small Miyajima station.  From there, we walked a couple blocks, following the signs to the ferry port, where two different ferry companies offer a quick 10-15 minute ferry ride across to the island. Each charges the same (around $3.50 round trip), and I couldn’t find a clear advantage of one over the other, with one exception.  Holders of the JR Pass ride the JR Ferry for free.

Where to Stay on Miyajima Island

Lodging on Miyajima is limited.  There are a few small hotels and Japanese guest houses (Ryokan).  Booking.com is a great website to use for finding them. Book well in advance if you want to stay on the island.  By the time I added Miyajima to my itinerary, I couldn’t find anything on the island at a reasonable price. Alternatively, plenty of lodging options are available in nearby Hiroshima.

I loved Miyajima Island! And to think I almost didn’t go because the iconic torii gate was under construction! The tripper in me had alternative plans in Hiroshima for the afternoon in case we decided to return from the island after a few hours. Turns out we spent the entire day, returning close to sunset. One day seemed adequate to see the highlights of the island. But I also think it would have been great to stay on Miyajima for a couple days and really soak it all in. Maybe next time….

This day on Miyajima Island was just part of our 9 days in Japan. We also spent a day in nearby Hiroshima – the highlight of which was a visit to the Peace Memorial Park. Click here to read more about visiting Hiroshima.

As I mentioned earlier, Kyoto was the base for our Japan trip. In addition to visiting Miyajima Island and Hiroshima, we took several shorter side trips. Click here to read about those easy day trips from Kyoto.

Our lunch on Miyajima was delicious. Check out my post on the Food of Japan for more insight into Japanese cuisine.